About Laytown Races
The Laytown Races occupy a unique position in the Irish racing calendar, as Ireland’s only horse racing event run on a beach under the Rules of Racing.

The Flat racing event takes place once a year, every September, on the County Meath strand, on a straight, almost level course. Races are confined to six and seven furlong distances.

The committee led by current Chairman Joe Collins, oversees the organisation of the yearly race meeting alongside manager Kevin Coleman.

People travel from far and wide to witness the spectacle of horse racing on the beach in Ireland, with crowds in excess of 5,000 in attendance every year.

History of the Laytown Races

The Laytown Races first began in 1868, when races were run on the beach in conjunction with the Boyne Regatta. A rowing competition took place on the high tide and the horse racing began when the tide receded. Initially the races were a sideshow to the regatta and were only held when the combination of high and low tides allowed it. 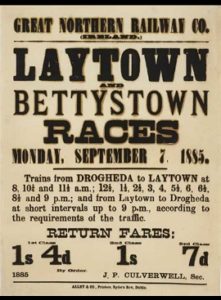 Racing took place intermittently during the late 1800s. Local folklore suggests that the parish priest, supported by the Bishop of Meath, was opposed to the races. In 1901, a new parish priest arrived, who was supportive of the Laytown Races and from then on the meeting began to thrive once again.

The final two years of the First World War saw racing suspended at Laytown, resuming in 1919. There was a further break in racing during the Second World War between 1942 and 1945.

Racing continued over the years and in the 1950s and 1960s, Laytown was considered an important meeting for horses preparing for the Galway Festival.

Up until 1995, racing was run at distances between five furlongs and two miles with a U-shaped turn at Bettystown where the horses made a sweeping return before heading back to the Laytown finish.

Many of Ireland’s champion jockeys have ridden winners at the Laytown Races, including Ruby Walsh, Colin Keane, Pat Smullen, Joseph O’Brien and Declan McDonogh. A number of top amateur riders, including Nina Carberry, Patrick Mullins, Jamie Codd, Katie Walsh and Derek O’Connor, are among the winners on the beach too.

A detailed history of the Laytown Races has been captured in the book ‘Laytown Strand Races – Celebrating 150 Years’ which is available to purchase here.

Charles Stuart Parnell, leader of the Home Rule movement, was one of the first stewards of the Laytown Races.

In 1875, the card at Laytown included a bicycle race where gentlemen rode penny farthings along the strand.

In 1915, with the outbreak of the First World War, racing was practically suspended in England leading to a surge in visitors to Laytown and a record entry of 73 for its five races.

The War of Independence impacted on the meeting of 1920 with a large force sweeping on to the beach in full war kit.

In 1949, the Aga Khan, one of the sport’s legendary owners and his wife, the Begum, attended the Laytown Races.